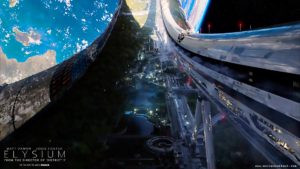 Washington, DC – In a packed White House pressroom, President Trump announced today his new plan to send the wealthiest to newly developed islands hovering in the sky. “It’s a new dawn for the most prominent heads of our country” declared the President “as these islands are being built in New Mexico and will reach the skies above our heads by the end of 2019”.

The wealthy individuals will reach their new homeland through charted jets “gently offered by private sponsors, including weapons manufacturers and the NRA” claimed Trump.

As for the remaining 99%, the future appears “as bright as in a Philip K. Dick novel” he added “since the 99percenters will enjoy the chance to live like in a science fiction film: they will wander in dark, dirty and overcrowded streets where people eat Asian food and sometimes get beaten up by Robo-Police. The robots will be produced by Boston Technology that, needless to say, is a sponsor of the operation”.

The Trump Administration initiative bears the name “Equal Society Plan”, since “by removing the top 1% from the Earth surface we will create the statistical basis to have a more equal society among those who stay”, as mentioned in a leaflet distributed during the conference.

As for social mobility, the 99percenters will enjoy the chance to make it to the island “like any other individual. There will be many maintenance and cleaning positions that will need to be fulfilled. Everybody can work on the islands” said the President. “There are many ways to make a ton of money selling your body or your dignity to the wealthy”, he added.

The project will be completed by a long-awaited tax reform plan that will hit hard on the top 1% of the United States. The only issue is that the new tax rate will be applied only on Earth, for an additional fiscal income of zero. “Everytime you satisfy a request of these guys” declared Trump “here they come with another complaint. Sad.”