Scroll to Top
HOT
Categorized as
20
Tagged as
deathstardisneygeorgelucasIveGotABadFeelingAboutThisReturnOfTheJedireystarwarssolofilmstarwarsStarWarsBattlefront
Related 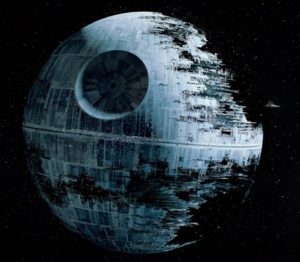 Mount Graham, Arizona – “Of course it’s a bad thing that the Empire wants to shoot at us and terminate planet Earth, but I must agree with them. The moon is the Death Star and will shoot if the next Star Wars film is as devastatingly terrible as the last ones” claims Prof. Sigismund Lothar, Head of Close Space Exploration at Large Binocular Telescope in Mount Graham.

“It all started with The Phantom Menace and that Jar Jar Binks thing” adds the professor “when we noticed some strange movement on the satellite’s surface”. Eventually, the signs that the moon was a space weapon with the capacity to erase planets became clear last year, “when General Leia flies in space like David Copperfield. It must have been too much for them”.

But who is “them”? “It’s a first because it’s not just the bad ones: also the rebels are on board and are helping out to better aim at the headquarters of Disney in Burbank” claims Dr. Victorina Chufchuf, Assistant Observer at the Telescope. Mrs. Chufchuf reports that “the structure of the moon is way different from what we always thought. It’s all metal with some brown coating, cured by enslaved Ewoks”.

The scientists are signing a petition to the UN to try to convince Disney to write plots with a little more sense, in order to avert the Apocalypse. The text of the appeal reads that “it could take any normal individual to sketch a story without the incredible plot-holes of the last episode”. There are also complaints about the fact that some girl can use the force without any training (whereas Luke Skywalker needed more and more beatings by a little green creature), and the substitute for Darth Vader is an Emo with less personality than a hamster. The researchers in Mount Graham declared that the main risk would be another film with the same story – the Empire tries to build the Death Star and then it’s destroyed.

The claims of Prof. Lothar haven’t been proved by any other observation center, but 75,000 Star Wars fans signed the petition in the first hour it was posted. “Everybody is scared that the new ‘Solo’ film to be released at the end of May will destroy the legacy of Han Solo, after having feasted on all the Star Wars tradition” believes Prof. Lothar.