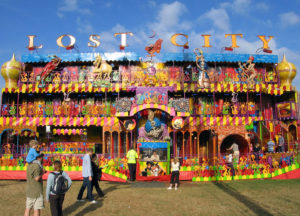 Wichita Falls, Texas – The “Gallery of Horror of Republican Advisors” opened Monday in a former slaughterhouse in Wichita Falls, Texas. “The choice of the building has been very lucky” declared John John Bingleboo, owner of the gallery, “since it required just a limeted set design intervention to change from the original”.

In particular, “visitors will enjoy the chance to meet a robotic Henry Kissinger walking on piles of Chilean and Indonesian corpses”, adds Mr. Bingleboo. The hall of Kissinger, titled “Hall of Vlad”, is close to a pavillon dedicated to Karl Rowe, where people will experience how the consultant to George W. Bush changed the US political landscape by having elections decided by people that had no previous idea of politics. “A great innovation to include everybody” says a sign at the entrance. In the installation, normal and happy people enter a gigantic Karl Rowe from the mouth and exit from somewhere else shouting slogans against “Arabs” and “those Mexicans”, with a rifle in their hands.

Concerning contemporary times, the “Steve Bannon Room” is dedicated to a vision of the world consisting only of the US and nothing else, not even Puerto Rico. “This reconstruction represents the utopia dreamt by Mr. Bannon and leveraged as key political message by President Trump” explains Mr. Bingleboo.

As for the 1970s, a hommage to the Watergate Scandal is paid through a video reenacting how Nixon advisor John Ehrlichman committed the crimes of conspiracy, obstruction of justice and perjury.

“But we don’t want to leave the visitor without a smile on his face” claims Mr. Bingleboo ” so the last rooms before the exit are dedicated to contemporary punch-lines such as Roger Stone and Stephen Miller”. Not-so-scary or positive figures from the Republican side such as John Foster Dulles and Caspar Weinberger have been left aside.

The museum can be visited sitting on smaller scale replicas of tanks. Access is free but is reserved only to white Americans.