Scroll to Top
HOT
Categorized as
32
Tagged as
merkelmigrantsseehoferunionsstreit
Related 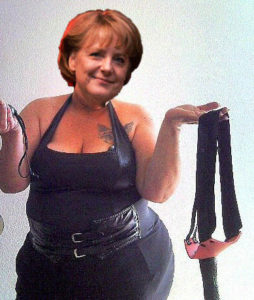 Berlin, Germany – After the migrant negotiation ordeal an increasingly isolated Angela Merkel is considering leaving politics and returning to her previous career as domina in Berlin.

It is a common move for politicians ending their public career to return to their previous job, and this was the case of Lady Whip. “Luckily enough” claims our source “Frau Merkel always kept her website online, so her customer base is still present. More still, her stint as German Chancellor seems to have resulted into a rise in her hourly rate, that now ranges around 1,000 euro”.

The fact that Angela Merkel was a domina in post-DDR Berlin finally explains how she could make a living as a University researcher, one of the most poorly paid jobs in the world.

In recent negotiations with the head of allied party CSU, Horst Seehofer, discussions about migrants policies have not been met with an agreement, and Mr. Seehofer decided to resign. “Yet” concludes our source “the decision to wear the Lady Whip costume had been in the air for months, since already last year an intern was sent to clean Frau Merkel’s secret wardrobe to the laundry”.