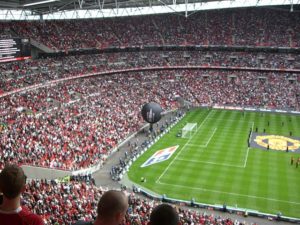 London, UK – “It’s absolutely unconceivable: some Russian in London dies for food poisoning and they immediately point the finger at us”: these are the words of London resident Spy Stefan Vasiliev, aka plumber John Smith, head of the Association for Russian Spies in London – a 102,000 members strong network. In the opinion of Mr. Vasiliev aka Smith, “it’s clear that they are throwing on us the responsibility for bad sushi quality in London, that keeps on killing Russians”. The sushi quality is so bad that the rotten fish starts producing military-level poisoning gas.

Mr Vasiliev aka Smith claims that “in 34 years of honest spying in London, nothing like this ever happened to me”. That’s why he gathered all the members of his association to Wembley stadium for a three days conference. Residing football team Tottenham Hotspur gladly accepted to postpone its games in fear of more servings of faul sushi. In exchange, the spies helped to fix the match against Bournemouth, played on 11th March and ended with a suspect 4-1 for the Spurs (the match has been played in Bournemouth instead of Wembley as originally planned).

Up-and-coming Russian spying star in London Angelka Grandov aka domina Madame Whip believes the mass demonstration of Russian spies could represent a changing point in the history of spies in the City: “It’s just about time that they start to accept us as normal and integrated London citizens. We are just a minority like any others. Italians are being accepted. Indians are being accepted. Even the remaining English people in London are accepted. Why this double standard against Russian spies?”.

In response to the attempts of Premier Theresa May to repatriate Russian spies, some members of the spies association will be appealing to the International Court of Justice in the Hague. “It’s also for the benefit of the city” claims Vasiliev aka Smith “since our departure would represent an estimated -5% in the economy of the city, and many high-end restaurants in Soho will have to shut down because of lack of spy clients. Not to mention all the Russian spies that will have to give up their fake occupations”. There is also concern that the lack of spies would impact the Soho House group, “unless you really think there is enough hipsters in the world to fill so many Soho Houses in London”, concludes Vasiliev aka Smith.

In an official note, the British goverment claimed that the action of deporting Russian spies was long due, since the Russian embassy occupies now 134 buildings full of “diplomats” and this is also not beneficial for homing prices in the city center. Shipping the spies back to Russia is a complex operation and the entire British Airways fleet has been seized for two weeks to complete the task.