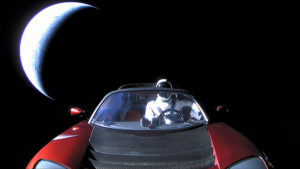 Solar System, Milky Way – It’s another hit on the head for genius startupper and Tesla founder Elon Musk: the Tesla Roadster he forced his employees to launch into space in February 2018 had to turn back to Earth yesterday due to low batteries.

“It slipped between the cracks somehow” declared Marius Straccivicius, Ph.D., Head of Space Advertising Operations for Tesla “but with all the enthusiasm to prepare such a mega idiocy we forgot that there is no electric charging stations in space, and now the batteries of the car are almost empty”.

Possibly this is a problem that every Tesla owner shall face if he doesn’t belong to wasp communities in the city suburbs, with the own villa and garage with a plug. A normal person shall find a charging station, leave it for one hour or two, and then pick the car back [Editor’s note: One or two hours: the worst time span possible. Good if it were shorter. Good if it were longer, so you can do other things. But one hour?]. Unsurprisingly, the situation in the outer space doesn’t look any better.

For this reason, Mr Musk decided recently to pull back from the efforts to solve the Tesla Model 3 production issues in order to better concentrate on the electrification of space. In an investor call held this morning, Mr Musk described the blueprint for a project to electrify space, as this is “what will pave the way to Mars”.

The Tesla Roadster from outer space will be parking somewhere in the Gulf of Mexico next week.