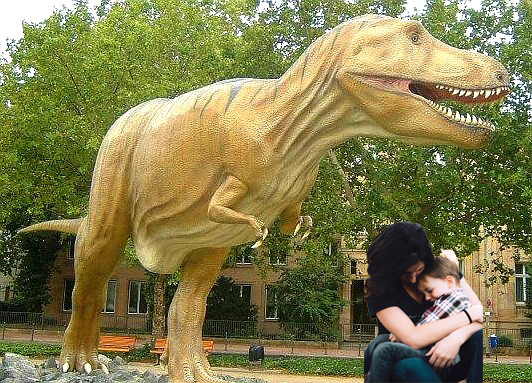 Winnipeg, Canada – All that dinosaur thing is just a big scam aimed at selling more toys to kids: this is the stunning revelation of Prof. Albert. A. Winsapoonie from the University of Winnipeg.

“It had always been hard to believe” claims Prof. Winsapoonie “that tons-heavy things would just wander around the globe millions years ago, then die and resurface back into toy stores like nothing”. In his ten-year research, the Canadian academic focused on debunking the holes in the history of dinos: “Come on, since the first fossil discovery in 1824 the scammers haven’t been able to come up with a credible plot solution to explain why those big lizards disappeared”, declares Prof. Winsapoonie.

“As an academic I prefer to believe in simple explanations” adds the professor “and all things considered Godzilla is more credible than the Velociraptor. At least we know how Godzilla dies, whereas the Raptor somehow lands into stone and becomes a sort of stone pic. Ridicolous.”

The Dinosaurs Scam is the largest scheme in human history, prompting a multi-billion dollars industry with accomplices ranging from Universities to fake natural history museums. “Those big skeletons we see on display are actually made with concrete in a factory in Thailand”, claims Prof. Winsapoonie. To back his discoveries, he shows some pictures of the factory, where enslaved Asian workers are forced to create fake fossils for 20 hours a day.

Prof. Winsapoone reminds that also all the “Jurassic Park” thing is impacted, as the franchise might lose all of its appeal: Dinos wouldn’t be more credible than the Looney Tunes.

The biggest benefitter from the scheme, toys franchise “Toys’r’us”, refused to comment.