Scroll to Top
HOT
Categorized as
16
Tagged as
assadpresidenttrumpputinrealdonaldtrumpsyriatrump
Related 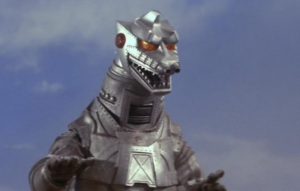 New York City, NY – It was clear that Russian President Vladimir Putin could not just stand still watching the West bombing those Syrian facilities for the production of lethal gas: at the push of a button, a Russian.made Mechagodzilla started marching from a hidden Silo close to St. Petersburg towards the US East coast.

“We are ready for the arrival of this robotic beast: the populace shall not worry” claims Gen. Luther Honda, responsible for land defense against Russian-made mechas “we are preparing a high-voltage fence all along the Atlantic US coast. Mechagodzilla can’t stand a chance”.

The Serpopard reached Mr. Putin on his mobile phone as he was vacationing in Crimea. At first the Russian leader pretended not to know anything, but upon watching some photos of a large sign on the mecha’s back reading “Made in Russia”, he had to admit the evidence.

“The West feared an intervention in Syria for almost ten years fearing my retaliation, as my protegé  Assad enjoyed a free hand to kill and torture Syrian citizens. But now my answer has come and his name is Mechagodzilla, or メカゴジラ” declared Mr. Putin.

It is still uncertain how many Mechagodzillas are ready to be sent from Russia to the US since the program was started in Soviet times under President Nikita Kruschev, inspired by his passion for Japanese cinema. Older Mechagodzillas are propelled by a two-stroke engine that seem to be quite noisy. They can be 60 cm tall.

It has been estimated that at his cruising speed the Russian Mechagodzilla will reach New York by late Autumn in 2027.