Scroll to Top
HOT
Categorized as
14
Tagged as
AlabamaFTBLGeorgiaFootballGoBuckslastchanceuncaa
Related

In fight against CTE, NFL to introduce exploding helmets 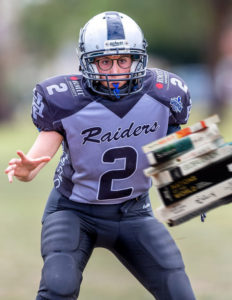 Tuscaloosa, Alabama – Fred Brodino is the first of a new generation of football players that will complete a Ph.D. before proceeding to the NFL. One of the best running-backs of his year, Mr. Brodino stands great chances to make it to top-tier professional teams, “But quantum-physics comes first”, claims Mr. Brodino, who is pursuing his degree at Alabama University.

The athlete completed his undergraduate requirements five years ago, and then joined a MA program about particle accelerators. “But it just seemed not enough to be at par with all the others running up and down the field”, says Mr. Brodino “and rightfully so I was compelled to join a Ph.D. program”.

If everything goes the way it should, Mr. Brodino will complete all academic requirements by next year and could join professional football at the age of 30.

“My family is very happy about it” believes Mr. Brodino, “especially my youngest son, who is starting school this year and is very proud of his NCAA star father”.

More people are going the same career path as NCAA is making Ph.D.s mandatory to have access to NBA. Simon Tyrrel Jr, the quarterback of the team, is all but disappointed by the idea: “I can keep on living in the campus for many more years and hit on undergrads like there is no tomorrow. And, in the meantime, I will gain a Ph.D. in Structuralist Philosophy”.

The dean of AU, Mrs. Franciosina Bloomingdale, is enthusiastic: “Before the reform we had to kick athletes up to useless degree just to allow them to play and fill the stadium. Now we are into serious intellectuals, that can stay with us for up to ten years of studying”. The University is talking with Netflix about the chance of a serialized documentary about the team, “with the chance of having it last for ten seasons with the same players”, claims Mrs. Bloomingdale.

The plan will be fully operational by 2026, when all NFL players will be required to have a “Dr.” title before their name. Under the new rules, athletes will be allowed to play wearing glasses.