Degree not enough: Football players will need Ph.D. to be drafted by NFL

In fight against CTE, NFL to introduce exploding helmets 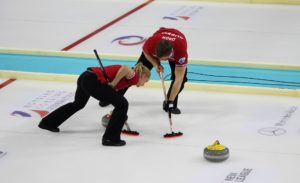 Geneva, Switzerland – Curling, that strange sport where people swipe ice avoiding to be hit by a sliding stone, was never truly supposed to be an official Olympic sport: “We just wanted to make fun of the Swedes” claims Roberto Camon, IOC Vice-President for Sport Disciplines “it was a popular inside joke here at the Committee. Then those fierce Scandinavian people ended up sweeping up medals like there is no tomorrow, and we were to embarrassed to call it back”.

Curling is based on the use of some funny brooms that you can get at any Wal-Mart in Sweden, together with some strange stones that are manufactured only on an island in Scotland. It seems that there is an entire rite concerning carving the stone, where Gandalf in person has to come and hit a hillside with his stock. Elves take the rocks and produce the clear cut final sport equipment. Salespersons must be virgin.

“Not really the most efficient production process” adds Mr. Camon “since the waiting list for those stones now can be also two generations. Athletes [Mr. Camon chuckles] are therefore most of the time aging gentlemen and ladies that play this sport [Mr. Camon chuckles again] after work”.

But how can we explain the incredible success of curling in Sweden? “Well, if you have to spend your Winter there there is not that many alternatives”, says Mr. Camon “so people end up sweeping ice surfaces and making them very clean. They claim it calms them down”.

Gotham Gustavson, the reigning Swedish curling champion, is not bothered by the opinion of Mr. Camon: “As it ends up, the joke is on you. And thank you for the medals”.

Studies claim that an Olympic medalist in downhill skiing must train since the age of three every day for 25 years to enjoy a podium chance, whereas curling athletes need just a short briefing about the basic rules before the Olympic competition.