Scroll to Top
HOT
Categorized as
15
Tagged as
assaddoumaputinsyriatrump
Related 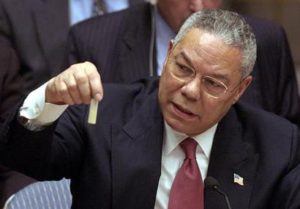 Aleppo, Syria – It took some time, but finally the truth has been unveiled: Saddam Hussein was really hiding WMD somewhere. The fact that the weapons were not in Iraq but in Syria might explain why the 2003-2011 war and US occupation was not enough to retrieve the hidden arsenal.

“It seems we have been looking into the wrong place for the whole time” claims former Secretary of State Colin Powell “as we searched the entire country with a fine-tooth comb and ended up with a couple of firecrackers. We were in the wrong country”.

Mr. Powell had gone so far to swear in front of the UN that the late dictator Saddam Hussein was hiding a large arsenal and an intervention was necessary. Mr. Powell has been proven right fifteen years later.

The evidence is unquestionable: the WMD come in the shape of large pipes into some wooden crates with stencil writings reading “This is the WMDs from Iraq that the US has been looking for”.

How the weapons ended up in Syria is not to be known. Some sources claim that in the same cavern where the crates have been found there are also the Holy Grail, the Ark of Hope and some strange luminescent stones.