Scroll to Top
HOT
Categorized as
17
Tagged as
borderwallbuildthewalldonaldtrumppresidenttrumptrumptrumpwalltrumpwallnow
Related 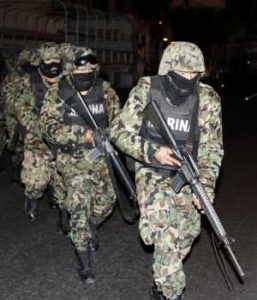 Washington, D.C. – It’s the talent of great leaders to balance between stubbornness and a true assessment of circumstances – and US President Donald Trump yesterday  changed his attitude towards the border wall with Mexico as he declared war on the country. At an estimated cost of up to 25 billion dollars, “a wall would be way more expensive than a simple war against Mexico as a whole”, declared Trump theduring a closed door meeting in the Oval Office.

“You see” said the President “why should we bother so much at keeping those Mexicans out that want to enter. We can much more easily enter their country and teach them a lesson. You don’t enter America, oder America enters you”.

But what about the recent misfortunes in conflicts such as the ones in Iraq or Afghanistan, with spiraling costs and uncertain outcomes? President Trump claims “it’s not comparable because there we were fighting wars two continents away, whereas here we are just crossing the border”.

National Security Advisor H.R. McMaster added some information: “We won’t need expensive flight transports. We will use more affordable American transport means such as a Ford Escape family wagon. I mean, I don’t really care in the end because I might be gone in two hours as all the NSAs before me”.

The war ultimatum has already been delivered to Mexican President Vicente Fox, who replied in a note “It’s actually more than 10 years that I left office, what do these guys want from me?”.