“Sincere” film museum will scare off your kids from film career 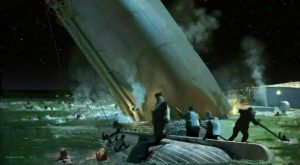 Newfoundland, Atlantic Ocean – You thought that the story of Jack Dawson would end with the first Titanic? “You are very wrong” claims director James Cameron “as twenty years after the first film we are working on a sequel: Jack in the Deep Blue Sea”.

The original story saw the onset of an extramarital affair between a gold-digger named Rose and a good-looking loser called Jack. In the original film, Rose is supposed to marry some rich banker and:

Subject to hormones (Rose is 17), she opts for an immature romance with this Jack guy she randomly meets on board. As all vacation affairs, also this one is immediate and overwhelming, and unluckily it ends at the peak of dopamine production. So Rose decides to disappear and basically:

Actually, Jack is revealed as a poser since both teens would perfectly fit onto the floating door  especially Mr. Leonardo DiCaprio, that before “The Beach” used to be feather light. Jack Dawson just wanted to show off how tough he is. Well done Jacko.

“Titanic 2 will follow the submarine adventures of Jack” continues Mr. Cameron “as he, frozen to death, is met by a lobster, some deep-water snails and a lanternfish”. His skeleton manages to survive 84 years of decay and when finally Rose throws away the diamond, the collar lands perfectly around Jack’s neck”.

Mr. Cameron believes that “the sequel will be way more meditative that the first one, and possibly more psychological”.