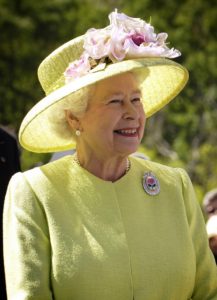 London, UK – It looked like a successful migration story: a family from the continent moves to Britain and inherits an Empire from a deceased family. George, Elector of Hanover, thought to have hit the jackpot back in 1714 when he received the news that he was to go to London and be King. More than thee hundreds years later, the Brexit hit back and terminated the happy times of the House of Windsor: the Queen is to be sent back to Germany with no further ado.

So claims a secret document leaked to The Serpopard by a drunk governmental aide in London. The plan is marked as “Queen Termination Plan” and is part of the measures that premier Theresa May has to undertake in order to cut any ties between the British Isles and continental Europe.  Any other strategy has failed, including a film (“Victoria and Abdul”) in which German native-speaker Queen Victoria speaks fluent English, as a final attempt to Brit-wash the Royal House.

“It was in the air” claims Prof. Mundy McDowell, Historian of the House of Windsor at the University of Sussex “as the Royal House does not represent the country: the Royals are the country. Therefore a Brexit with a German Queen wouldn’t make any sense. We need some more… Brits”, claims Prof. McDowell.

In the absence of presentable British relatives, the document claims that adequate substitutes could be songwriter Paul McCartney (although he’s too friends with the current Queen), former football star Paul Gascoigne, singer Mel B or socialite Nancy dell’Olio, “all people that would please the older and younger generations”. Actor Michael Caine has been contacted by the MI5 for an informal opinion and supposedly refused since “Royal House has become far too un-British for me”.