Scroll to Top
HOT
Categorized as
14
Tagged as
donaldtrumpMarchForOurLivespresidenttrumptrump
Related 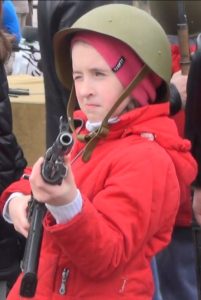 Possum Grape, Arkansas – In a pilot project, all the schools of Jackson County, Arkansas, are going to substitute English literature with gun practice. “It was long due, because when shooter guy gets in, you don’t kick him out with no poem” declares local resident James ‘Cuck’ Roselberry spitting some tobacco on the dry ground in front of his motorhome.

The program, titled “Young Guns”, is to be extended to all  US schools within three years. David Mazinga, the spokesperson of the Secretary of Education, claims that “the change will exert dramatic improvements in the safety of students, because they’ll be able to react in no time when the intruder comes”.

The original idea for the “Young Guns” program came from President Donald Trump during a drinking game with some NRA representatives. “Gotta make anti-gun folks shut up” reportedly said the President “and then we give them more guns, so it’s like guns”.

In a presentation of the program held in Washington last week, Secretary of Education Betsy DeVos declared that “in the end, people are ready to express themselves adequately enough at the age of six. So why should we punish them with stuff written by dead people, sometimes even from England, centuries ago? What do you make of Shakes… Shuks… that Scottish guy when the killer is at the school’s door?”

Schools will be restructured to have adequate spaces for aiming practice, “But that may be the usual thing, with the rich folks with the great practice hall, and the others aiming at cans and whiskey bottles” declares Mr. Roselberry.  A concern shared by many observers, forcing Secretary DeVos to react adequately: “We introduced a financing plan to help schools in less affluent counties to afford great shooting ranges. We had to cut on teacher’s pay, but who cares in the end”.