Scroll to Top
HOT
Categorized as
16
Tagged as
BoycottUnitedunitedunitedairlines
Related

“Gallery of Horror of Republican Advisors” opens in Texas 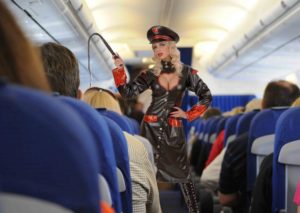 Chicago, IL – United Airlines is prone to weird incidents. After dragging off a passenger from his seat and experiencing a scorpion invasion, the airline went on a killing spree. Victims include a giant bunny, a dog put in the overhead locker, and just some more dogs of all races killed in the most sadistic ways – frozen, scared to death, eaten. “But we want to go the extra mile” claims Debra Valpolicella, Sadist-in-residence at UA “and we will equip our crews with whips to lash passengers every now and then. Sadism is our brand”.

The company realized that the thrill of being mistreated is what really leads passenger to chose United Airlines above the others. “I mean” adds Mrs. Valpolicella “where else would you enjoy the chance to be beaten up and forced out of your seat, if not with us? And we can kill your dear pet too”. The services come at no extra-cost, but this “shall be just for the initial launch phase, as we will start charging per service later on. One lashing will cost 5 dollars, to a 100€ full flogging, and the chance to street-fight a crew member for 200 dollars, but with a lot of miles to collect” adds the domina.

The idea of whipping passengers is nothing new in the airline industry, as it’s a routine service offered for free by low-costs such as Ryanair and Southwest. The fact that also United Airlines now is starting means that once again traditional airlines are turning into low-costs. Yet, some passengers seem to appreciate the deal: Mohamed Tatangelo, a bell player from Naples, Florida, says that “it’s as if the vacation started when you board the plane, instead of having to wait all those hours in the air to reach the sado-maso castle in Prague. Also business trips can become more interesting”.

United Airline is planning also to launch an entire new ticket class: after First Class, Business and Economy, there will be “Dungeon”. It’s also an idea taken from low-costs (that offer dungeon-only tickets). Pricing shall be the same as First Class though: “Part of the masochism” claims Mrs. Valpolicella.