Scroll to Top
HOT
Categorized as
19
Tagged as
easter2018palmsundaypontifexpopepopefrancisvatican
Related 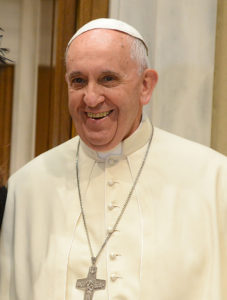 Rome, Italy – it came as a shock in the halls of the Vatican: Pope Francis’s Facebook account has been suspended due to policy infringement. As reported by the Website, “It seems that an individual named Jorge Mario Bergoglio wasn’t using his real name, and this is not accepted by the company rules”.

Mother Severa, a nun working in the Vatican, reports of town rumors about a “sad Francis calling friends as a means to fill up the evenings he previously invested on Facebook”. The head of the Catholic Church has been reportedly advised to open accounts on alternative platforms such as Instagram and Tumblr. “A younger priest also gave the Pope the idea to open a Linkedin account” adds Mother Severa. Since Ratzinger retired, the possibility that popes step back and have to look for new occupations is not a taboo anymore, and the Pope should prepare for what comes next, after years of leading a community of millions of believers. “Yet” claims the nun “some of our entourage believe that having been Pope might be a great reference to look for other jobs, especially in the media”.

A research by The Serpopard revealed that some older accounts by the Pope are still active, including a 2004 MySpace profile where Mr. Bergoglio was fancying a mullet and was presenting himself as “JMB”, bass-player of a Christian Metal band from Buenos Aires.