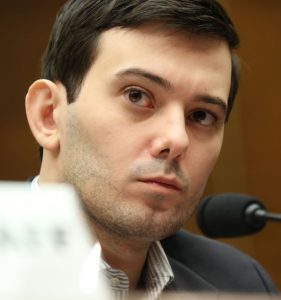 New York, NY – Cult fraudster Martin Shkreli thought he had made it: a light 7-year sentence for a multi-million scam involving the usual hedge fund and a bunch of MBAs. Judge Kiyo Matsumoto reportedly “struggled” to decide upon the sentence, as the prosecution had asked for 15 years and Mr. Shkreli sent her heartbreaking letters where he was claiming how sorry he was.

In one of the most delicate passages, Mr. Shkreli claimed that “he’ll be good if the judge was good with him”. Arguments like this eventually proved convincing, or so at least thought Mr. Shkreli: in a turn of events, the day after the sentence of March 9th Mrs. Matsumoto woke up and shot out an add-on to the decision: the initial 7 years would be multiplied 10 times.

“This is how you learn not to increase the price of life-saving drugs by 5,500% overnight, from 13.50 to 750 USD a pill, as Mr. Shkreli did two years ago” commented Mrs. Matsumoto. “I’ve also been lenient: If I applied the same multiplier as Mr. Shkreli, he would have gotten a sentence of 385 years instead of 70 to serve”.

Mr. Shkreli’s lawyers didn’t comment the decision but a strange smirk on their faces made observers think they actually enjoyed the news.