Scroll to Top
HOT
Categorized as
20
Tagged as
androidappleiphonesamsungsmartphonethewalkingdeadzombie
Related 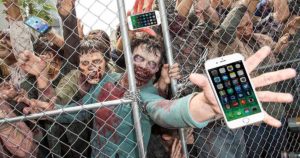 Springfield, Il – Schools and offices are to remain closed until further notice also in Indiana, Illinois and Ohio as the iPhone zombie epidemic is heading East after having infected the entirety of the West coast, Quebec and Yucatan. “It’s an apocalypse come true” claims Dr. Rochius Blanmonger, Head of Apple Related Diseases at the CDC, “as more and more people keep on spending their entire life watching the screen of their smartphone”.

Infected citizens are provoking an unprecedented stream of accidents walking on the streets reading rubbish on their phones, infecting other people by the mere contact of a WhatsApp message. “But don’t be misled,” says the researcher “these people may look like your friends and relatives, but it’s not them anymore. They are mentally dead”.

“It seems that the virus is exploiting some bug in the software of people’s heads” adds Dr. Blanmonger “they just can’t live without smart phones. It was in our DNA: take those people that even before smartphones used to walk in crowded places looking backward, even in Times Square. But this smartphone thing is way worse”.

So far, no cure has been developed for this monstrous disease that deprives people of the ability to talk to other humans or be aware of obstacles on their path. In the most virulent expressions, claims an instant CDC assessment, iPhone zombies jump on cars and go on a killing spree, often terminating their life while texting and driving.

There are reports of groups of survivors that are trying to reach ships and island and isolate themselves from the virus. It seems that the only way to block a smartphone zombie is to shoot at their phone, but authorities suggest other approaches. If you are met with rogue iPhone zombies, the CDC suggests to watch out for their erratic walking path in order to avoid serious contusions. In order not to be infected, the advice is also to ignore people that insist on having conversations on WhatsApp – the most virulent infecters are those that send messages such as “how are you?” or any other conversational ice-breaker.

The CDC forecasts that without a vaccine the epidemic will reach New York in two weeks and then head to South America. In case of trans-oceanic contagion, Europe is planning to bomb the major American cities.”We have never seen anything like this” declared Dr. Blanmonger.