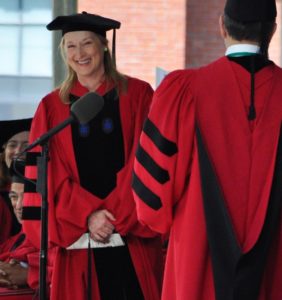 Hollywood, CA – After 21 nominations it’s time for a change: at the end of the last Oscar night, an exhausted Meryl Streep decided to switch from a “perform-as-you-go” model to a subscription for her Academy Awards.

“It’s just more convenient” declared the actress. “Instead of having to act me out every year, I can enjoy now the certainty to receive a nomination on a regular basis. I will be more relaxed and will even perform better, for the satisfaction of my fans”, added Mrs. Streep.

The Academy Subscription Model will begin this year on an experimental basis with Mrs. Streep, whose first nomination dates 1978 with “The Deer Hunter”, where she played a Vietnam veteran prone to self-destructive behiavior. Her first victory came one year later with “Kramer vs. Kramer”, an incredible performance with a double role.

The staff of the actress confirms that the subscritpion model will also be great for hotel bookings since it will allow Mrs. Streep to make reservations years in advance exploiting incredible web offers.