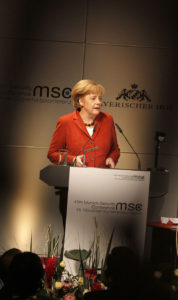 Berlin, Germany – The German Parliament has unanimously voted to abandon the German language within four years since the cryptic idiom is just not a fit for the contemporary world.

German Chancellor Angela Merkel praised the choice in her speech at the Bundestag: “We are finally getting rid of a real burden for our country: a language that has been for centuries the one and only reason we couldn’t have a say in the global arena besides selling cars. German is too much, with all its absurd rules and squeaky sounds that made even words of love sound like threats”.

Prof. Finkelboden from the University of Jena led the study that inspired the new law: “We have proven beyond reasonable doubt” claims the academic “that this ‘German’ language was using up too much of our intellectual energy just to build simple sentences. Kids in Germany are able to express themselves only at the age of 13. The very structure of German language is also the reason why Germans don’t have any sense of humor. Jokes just don’t work”.

The study by Prof. Finkelboden also claims that the need to express oneself in German is also the reason why almost all Germans suffer from some kind of OCD.

The bipartisan law was penned by CDU representative Jonas Schickelbrüder, that remarks how “the need to switch to a more accessible language will open enormous investment possibilities: we need to teach a new language to millions of people”.

In terms of the choice of the new language, the first option was Italian, since “it would make Germans look more friendly in the eyes of the world, but then we thought we wouldn’t be credible” remembers Mr. Schickelbrüder, “so we opted for English. Also because surveys claim that 78% of Germans already talk in English with friends when tired”.

“It’s not that much of a loss” declares Prof. Finkelboden “also because German is a pure invention codified by an obscure monk that was rewriting the Bible to please some king in the Middle-Ages. The thing went a little too far, but it’s never too late to correct a mistake”.

Germany is the only country in the world where naturalized Germans living in the country since more than 15 years still inspire astonishment in people if they speak a more or less fluent German.