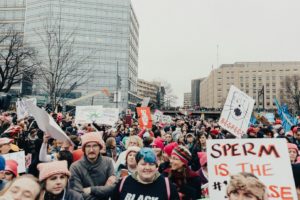 Chattanooga Tennessee – It was one of the hardest fought battles in the US rust belt: introducing the values of gender equality and feminism in one of the less progressive area of the world. “I had almost given up” declares Miranda Tinkerbell, founder of the initiative Female Freedom from Freaks “when out of desperation I started shouting it all around Texas and Alabama: more feminism means more chances of a successful pick up”.

A Pew Research survey reported that 87% of US men now embrace feminism as a result of the new marketing approach.

Eyebrows habe been raising in California and New York: “Not exactly what feminism is about” says Jeromina Yang of Freeegs.org “feminism is pro-choice. It means that women enjoy equal rights as men, not that they should have sex with every random stranger they meet in a bar”.

Yet, the message of Mrs. Tinkerbell is the one that’s enjoying the more success in the Southern states. Spontaneous carousels of cars have been organizing in towns and cities to celebrate the news.

The NHS reports that unwanted pregnancies have spiked 47% since feminism has taken over Texas, Mississipi, Alabama and Tennessee by storm.