Scroll to Top
HOT
Categorized as
23
Tagged as
berghainberlinberlintechnopanoramabartechno
Related 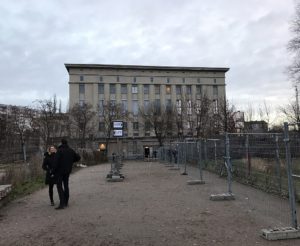 Berlin, Germany – A joint Chinese-American speleology expedition revealed that some ravers entered Berghain at the opening of the club in 2004 and never got out. “We believe they have been living on vodka-tonic ever since” claims Prof. Lu Yang, director of the mission, “together with a crunchy mix of MDMA and speed”.

The researchers had to enter Berghain drilling a hole into a side wall because their nerdy academic appearance would have proven a no-go with the infamous Berghain bouncers.

But such effort has been rewarded by the incredible findings. Some of the members of the ravers group are now approaching the age of 40 and are engaging in extravagant forms of family organizations. Prof. Yang describes them as “a promiscuous family structure where people communicate with each other through dance moves”.

The idea of dancing to communicate could be inspired by the joyful moves of tropical birds in the mating ritual, “but most certainly is due to the fact that the ravers are completely deaf after 15 years in the club. Also before entering it, anyhow, they were not great at talking”, says Prof. Yang.

The “families” may soon start reproducing and create offspring that would be the first generation ever to spend their entire life at Berghain, “not differently than any average 20 year old in Berlin in the early 2000s”.

The discovery of  will help shed some light on unsolved police cases in the German capital: some of the ravers may be people gone missing in the last years. “Yet” believes Otto Premberchgaden, Head of the Berlin police “it’s not sure if the families will ever want these individuals back. Also their reintroduction to a techno-less society could prove too difficult”.

Mr. Premberchgaden believe that the head of the group is one Mr. Camillo Luli, a high-school drop-out from Peru, that entered Berghain in 2004 believing it was a cinema.