Scroll to Top
HOT
Categorized as
22
Tagged as
berlinbvgdalailamaubahnweilwirdichlieben
Related 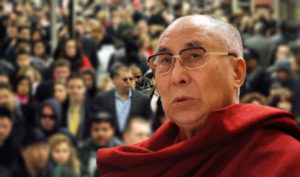 Berlin, Germany – It just happened: all the repressed rage of His Holiness the Dalai Lama came out yesterday when he tried to travel via subway in Berlin.

“I had told him” declared his assistant Geshe Lhakdor “that decades of Buddhist training would be nothing compared to the adventure of riding a Berlin subway train. But he just gave me one of those smiles of his”.

Mr. Lama tried to board the subway at Alexanderplatz. In the station he had to suffer four frontal hits with people looking at their smartphones while walking. He then had to wait 45 minutes observing wrong trains stopping one after the other. As finally the right train arrived, it was full of people like the Berghain at 3am on a Saturday night.

Mr. Lama was about to give up, but his assistant told him that they were late for a meeting they had in West Berlin, and the duo squeezed into the train welcomed by comments about “Scheiss Migranten”.

The spiritual leader was pick pocketed a mere three minutes upon boarding. Luckily enough, all of his belongings were represented by two nuts hanging around his neck, yet it was all he had. “For the first time in decades” says Mr. Lhakdor “I saw a tiny, uncanny grin on his lips”.

The Dalai lama was then fined 60€ for not being able to present a valid travel ID, as since he has no pockets he had no place to keep it.

Around the Potsdamer Platz station, Mr. Lama was asked to disembark the train and get on a bus due to a service interruption. He obeyed, although “with some face expression that had turned decisively dark” observes his assistant.

But the rage outburst came as the bus stopped at Wittenbergplatz. Not only was he fined again for not having a ticket, but he had to wait one more hour for his train, in the butter stench of a croissant kiosk and with some guys on drugs dancing around him like “I’ve seen the Dalai Lama!”. Not to mention the out-of-tune busker presenting his own version of “Knocking on Heaven’s Door” for all the waiting time.

Security Footage shows a distressed Dalai Lama screaming his heart out and attacking people at random.

The leader of the Gelug School of Tibetan Buddhism is currently held on observation at the Charite City Clinic. He’s being sedated and he is reportedly asking to be “reincarnated in Switzerland please”.