Scroll to Top
HOT
Categorized as
12
Tagged as
berlinberlinerzeitungGERinstaberlinklingonsmorgenpoststartrektwitterberlin
Related 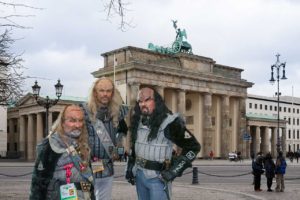 Berlin, Germany – Super-direct in their communication, lacking any trivial form of courtesy (“Please”, “Would you”), engaging in associations rather than families, not very familiar with “feelings”: it wasn’t hard to imagine and now it is confirmed. Klingons descend directly from Germans.

“It struck me as an obsession since I was watching Star Trek – The Next Generation as a teenager” claims Prof. Otto von Rückenschmerzen, Senior Researcher at the German Institute for Scientific Science-Fiction in Berlin “as I was asking myself: where does this Klingon complete lack of interest for manners come from?”

Prof. von Rückenschmerzen engaged in a research funded by his Faculty and quickly reached mpressive conclusions: “I actually didn’t need to look farther away than my surroundings. I was living among the grand-grand fathers of the Klingons, here in Germany”.

This result helped him explain also the mating rituals of Germans, based on a direct exchange of factual information leading to a swap of body liquids; or also the fact that in German subways you are pushed everywhere and seldom someone pronounces the redundant word “Sorry”. “It would be a sign of weakness that Germans wouldn’t accept” declares Prof. von Rückenschmerzen.

“Germany is a Klingon society in the making” explains the academic. “Take for example walking on a street in Berlin” he adds. “Pedestrains won’t make way and you risk to hit other people’s shoulders. There are so many cases of fractured shoulders because of this. It’s just an everyday challenge meant to show strength”.

Also the languages, believes Prof. von Rückenschmerzen, are unbelievably similar “although Klingonian is much easier and way more melodic”.

As for the facial features of the Klingons, and specifically those prominent foreheads, they are supposed to be a normal evolution of the constantly corrugated, disapproving foreheads of Germans.

Prof. von Rückenschmerzen claims that y 2400 Germany will become a full-blown Klingonian Kingdom and will start attacking other planets.