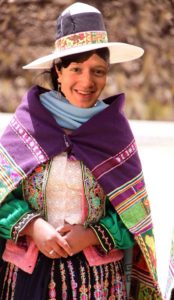 Sucre, Bolivia – Amid the Cambridge Analytica scandal, the founder of Facebook Mark Zuckerberg last night took a redeye to Sucre, a city in Bolivia, in an attempt to escape coming charges. But he could not resist the tentation to post some photos of himself with the local population on Facebook – and that’s how the FBI, in close collaboration with the Interpol, found him.

“Actually it was just an intern wasting her time on Facebook” declared Sergej Sprudel, Head of IT Chases at the Bureau: “She got tired of doing so many coffees for all the floor, so she took a break and began scoping photos on that thing. Whe immediately recognised Zuckerberg dressed up as a local woman, with a large skirt, a hat and an incredible wig with side braids”.

In other pics, Mr. Zuckerberg is seen riding a pony, visiting a cocaine factory in the Bolivian lowlands, and dressed up as Robert Redford in the role of the Sundance Kid, from the film shot in the country. In the most incredible shot, he is smoking a cigar and wears a guerrillero hat with a star.

Mr. Zuckerberg was using the fake name “Roberto Brigante” and his account was immediately suspended by Facebook for not respecting the policy rules about the use of fake names.