Scroll to Top
HOT
Categorized as
20
Tagged as
donaldtrumppresidenttrumptrumpmemes
Related 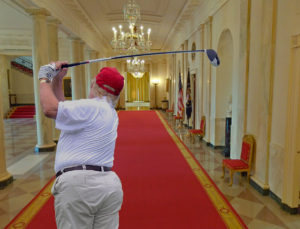 Washington, DC – Long gone are the times when the President’s staff would swarm in and around the rooms of the White House: in a few months the list of the departed has become longer and longer. Secretary of State Rex Tillerson is the last to leave after Gary Cohn, Hope Hicks, Rob Porter, Omarosa Manigault-Newman, Tom Price, Sabastian Gorka, Steve Bannon, Anthony Scaramucci, Reince Priebus, Sean Spicer, Michael Flynn, Sally Yates, a random janitor, the resident DJ and some valet parking guy.

“It reminds me a little of that Kane guy from the Orson Welles film” claims a White House staff member that prefers to remain anonymous. Reportedy, “President Trump at night howls around the House as that Hamlet father from the Shakespeare play”, claims the same guy that clearly wants to show off his culture.

At daytime, POTUS spends his time playing golf in the empty corridors of the White House, since few people to terminate are remaining in their offices. The survivors of the firing spree are afraid of meeting the President and keep on hiding under their desks as he wanders around. Wife Melania is not truly a consolation as she’s been avoiding eye contact with POTUS since 2003.

The wiseacre we mentioned above claims “it may be a danger to allow the President to sink down to the most recondite recesses of solitude: the White House would make a good earthly Sangri-La where the only form of entertainment is the Nuclear briefcase. Luckily enough, we’ve hidden it”.

A calculation by the Washington Post estimated that there is only three people left to fire from the White House.